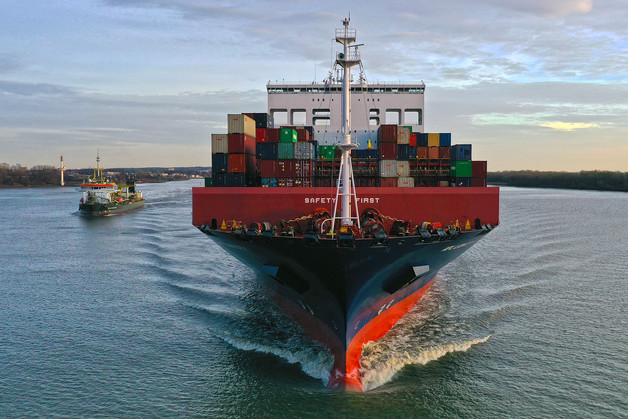 With seaborne cargo throughput up by 1.1 percent at 136.6 million tons, Germany’s largest universal port can report an excellent result for 2019. In the face of a slowdown in worldwide trade and trade sanctions, Hamburg gave a good account of itself in a challenging environment.

“The Port of Hamburg is not only one of Europe’s top logistics hubs, but also powers jobs in Hamburg and a much larger area,” said Senator Michael Westhagemann. “A total of up to 165,000 workers directly and indirectly employed there ensured that we were able to start the year with these very gratifying figures. The marked increase in container handling, growth in total seaborne cargo throughput, and the disproportionate leap in environment-friendly rail borne hinterland traffic, all show that the Port of Hamburg is on the right course. Yet it is also obvious that we cannot rest on our laurels. We are therefore continuously stepping up the port’s performance: Such major projects as the fairway adjustment and replacement of the Rethe and Kattwyk bridges represent vital assets for our port customers all over the world.”

In the seaport-hinterland transport segment of such importance for the Port of Hamburg, it was environment-friendly container transport by rail that achieved double-digit growth. In 2019 a total of 2.7 million TEU were transported between the terminals in the Port of Hamburg and those in the hinterland. That represents an increase of 10.4 percent, setting a new record for Hamburg’s Port Railway. In 2019, this handled some 62,000 freight trains with around 1.7 million boxcars. Total freight volume transported was up by three percent at 48.2 million tons.

In 2019, 5.8 million TEU – up by 7.8 percent – and 97.5 million tons – up by 0.8 percent – were shifted in seaport-hinterland transport by rail, truck, and inland waterways. The rail share of hinterland transport to/from Hamburg was 46.3 percent for containers and one percent up at 49.4 percent by tonnage. The corresponding percentage for trucking was 41.4 percent and for inland waterway craft, 9.2 percent. “In achieving a new record, Hamburg further extended its position as Europe’s leading rail port. Transferring freight shipments to rail and inland waterways helps to relieve pressure on roads,” stressed Ingo Egloff, Joint CEO of Port of Hamburg Marketing. This strong position is based on a significant number of more than 100 liner services linking Hamburg with the vast majority of over 1,000 seaports around the world. “Along with the inauguration of four new transatlantic liner services bringing us substantial growth in container transport with the USA and Mexico, a new service to Asia and one to India, along with two multi-purpose services, produced additional cargo. We are maintaining this upswing in 2020,” explained Axel Mattern, Ingo Egloff’s colleague on HHM’s Executive Board.

“Twelve months ago, I said at this point that the Port of Hamburg was on the offensive again. The figures we now have for 2019 provide impressive proof – and should also convince all those who are otherwise inclined to look to the future with skepticism on the subject of the port,” stated Jens Meier, CEO of Hamburg Port Authority. “We are continuing dedicated investment in infrastructure and digitalization to keep the port on the successful course we have adopted. In recent weeks, for example, HPA achieved important milestones with the construction of the new Kattwyk rail bridge and the new Burchardkai link. Both will make our port more efficient and fit for the future.”

In 2019 a total of 2.6 million TEU – up 1.7 percent – were handled in seaborne container traffic with China, Hamburg’s most important trading partner. “For the moment, it remains impossible to be precise about the repercussions of the coronavirus on volumes in foreign trade with China. Depending on how long restrictions last in the Chinese economy, a marked downswing could occur. With some delay, that would then be reflected in freight handling to/from China in Hamburg. We can only assess the position at the end of the quarter, at the earliest,” estimated Mattern. HHM’s Executive Board assumes that downturns in rail transport between China and Hamburg can also be expected. The new Silk Road meanwhile offers more than 200 overland services per week in addition to daily services with China by sea. By comparison with other centers in Europe, the total number of containers handled by sea and land in Hamburg makes us the leading hub for China freight by a wide margin,” stated Mattern. For both the maritime and overland Silk Road, Hamburg is the central hub for handling freight services.

Enlargement of the fairway on the Lower and Outer Elbe is also making good progress.
Work on widening two sections of the fairway adjustment has been completed. On the segment of the Elbe expanded by the WSV – Federal Waterways and Shipping Administration – as far as the Hamburg state border, known as the ‘passing box,’ since 29 January 2020 vessels with a combined width of up to 98 meters have been able to pass each other safely. Until now, the limit was 90 meters. The widening of the passing box along the remaining stretch of three kilometers, on Hamburg territory, will be completed by mid-year. On completion of this measure, the permissible breadth of the ships will be further raised. “With the initial fairway widening of the Elbe meanwhile completed, we are on a good course, immediately improving the conditions for calls by mega-ships,” said Axel Mattern. “For the shipping industry and our port customers, this is gratifying news for the start of the year.”

For shipowners, the fairway adjustment not only simplifies calls at Hamburg but facilitates the transport of extra cargo. “Greater draft and an easier situation for passing on the Elbe permit improved utilization of transport capacity on the ships,” explained Mattern. Once the Elbe has been deepened, large containerships or bulk carriers will be able to bring or take away around 18,000 tons more cargo to/from Hamburg. In 2019 the Port of Hamburg recorded a total of 684 calls by ULCs – ultra-large containerships – with slot capacities of more than 10,000 TEU. Last year, 165 of these were in the 18,000-plus TEU category. This represented growth of ten percent, underlining the necessity of adjusting the fairway. The port and its handling terminals are already handling mega-carriers with slots capacities over 21,000 TEU. Looking to the future, they are also preparing to handle arrivals and departures by even larger vessels safely. “With the ‘HMM Algeciras’ in May, we are expecting the first call by a mega-carrier with a slot capacity of 24,000 TEU,” said Mattern.

For 2020, the Port of Hamburg’s marketing organization anticipates a stable result on container traffic and a slight increase in bulk cargo handling. 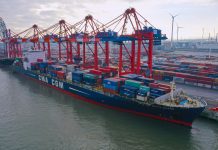 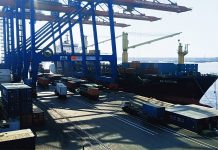 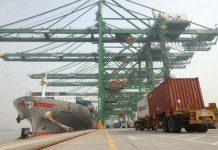